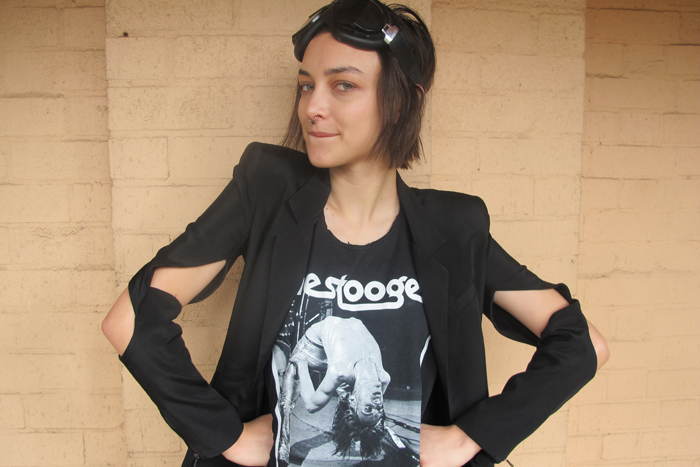 What is your favourite new piece of clothing, old piece of clothing, accessory?
My favorite piece of new clothing is a Romance Was Born dress, favorite piece of old clothing is a leather jacket and my favorite accessory would  be my Cyberdog goggles.
How would people describe your style?
Currently I’m running with Tank Girl meets 1970’s Punk, but I’m feeling a change coming on. New look is more Givenchy chic meets Cyberpunk.
One thing people would not know about you?
I used to be in a marching band playing tenor horn when I was a kid, and yes I was very cool.
In five years what do you want your life to look like?
FUN

When did Alys Hale (Chic model/best friend/band mate) and you meet?
I met Alys when I first moved to London 2-3 years ago. Our booker set us up on a friendship date predicting that we would get along. I remember the day, Alys had blonde hair and was wearing all black and I had brown hair, and was wearing a rainbow of colours. He found it amusing that we looked so different but were so similar.
Tell me about your band with Alys, Kitty and Cal?
Our band is called Tank Twin. It started with Alys and I’s mutual obsession with Tank Girl. We developed a hypothetical band called Tank Twin (for obvious reasons) when we were back both in London last year. The musical side of the band came together when Alys wrote me a song called Electric Awesome Dope Girl to help me remember the string on the bass (EADG). From there our baby was born. Upon Alys’ return to Australia I learnt bass, pulled in our very musically talented pals Kitty and Cal Callahan, who also look quite twin like, wrote some songs and the rest is musical history.
What instrument are you playing/ who taught you?
I’m on bass. I have been learning from my friends, mostly Laura Bailey of Mezko, Alys, and am doing a whole lot of practice. We booked our first gig almost as soon as we officially formed, so I only had 3 weeks to learn before the show. Given I had only learnt the string names the week before this was very ambitious. All my free time was dedicated to practice, up to 10 hours every day, and somehow I managed to pull it together. The biggest problem I had was my fingers tips getting sore and blistering from playing too much.
Tell us about your first gig, how did it go?
We played our first gig at The Flinders. I was so flattered by the support we had from our friends. We had a bit of a rusty start with a few technical difficulties, but managed to bring it home strong in the end. We have been asked to do a few other
gigs around town since, so I guess it was a success.
What inspires you creatively?
Mostly people, at the moment my inspirational person is Richard Feynman.
Any other creative endeavours currently working on?
Usually I work in visual art. I am currently working on an interactive technology based piece that will reflect the individual’s ghost.
I also styled my first shoot for Feel the Future, the latest project from the wonderful Renee Warner and Gibson Fox. It will be launched next month and I’m very keen to see the end result. I was inspired and humbled to see things from the other side of the camera.
What exhibition are you having in New York? Or is it a secret?
Secret for now.
Exclusive interview by Chic Management