Hannah McDougall recently adventured out to the Simpson Desert into the depths of central Australia. She has written accounts on her time spent in the location and the additional locals she spoke to during her stay.  Laila Wicks captured the beauty of the surreal rich Australian landscapes with Hannah wears Nice Martin slip dress.

More of Hannah’s writings are further featured on her online journal, whereby she discusses aspects of her travels and the people and experiences her career has merited her with over time. 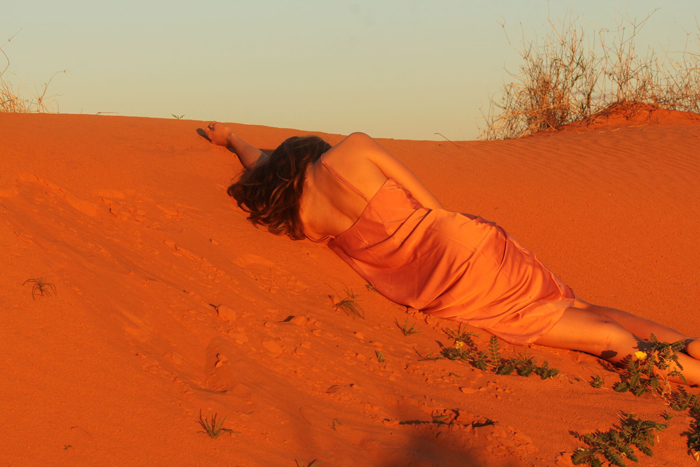 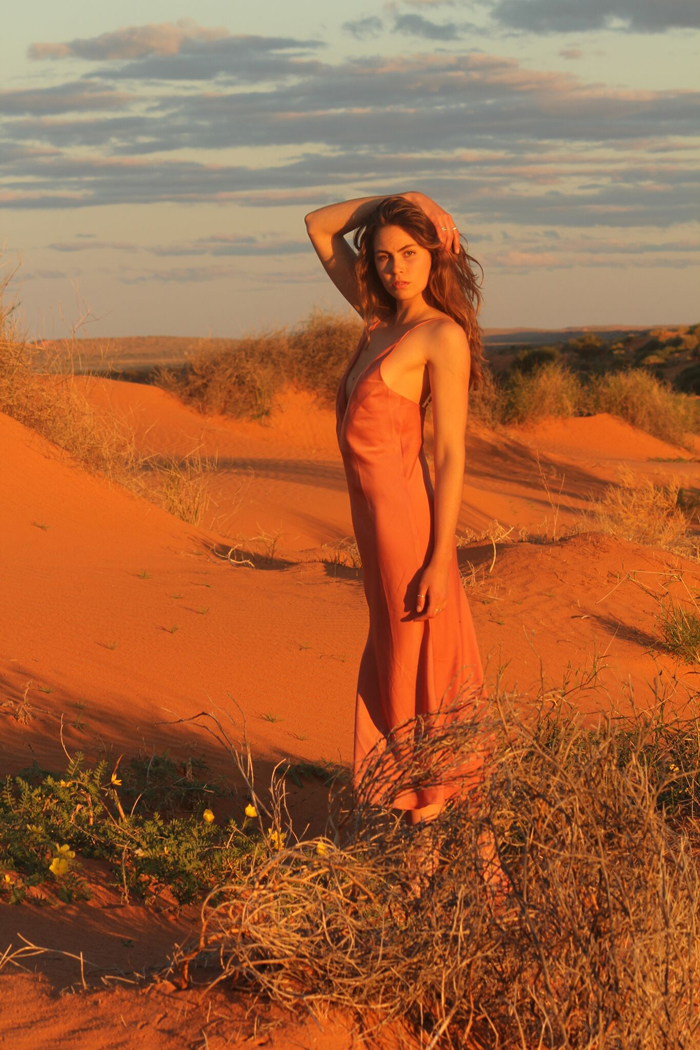 “You may just be the first model/cameleer in all of history,” he proclaimed. There was no need to repute; it was a title I was willing to own.

The Australian desert isn’t for everyone; I know that. With its flies, mosquitos, extreme polarisation in temperature. But than again, its winter wild flowers blanketing the dunes like freshly fallen snow would surely move even the most unenthusiastic of explorers. “Why did you come to the desert?” he asked, as we sat opposite one another in the Birdsville pub on our final night of the expedition. “Why not?” I replied. And to be honest, I hadn’t given the trip much more of a thought than those two simple words implied.

I believe I was in grade four when my school teacher told me to take every opportunity that came my way, for in the end, you have nothing to lose and everything to gain. Those words resonated deeply with my ten year old self (of that I’m sure) and I attribute them to the very reason I succumbed to the powers at large and left my small, coastal hometown of Yeppoon to begin modelling.

The Simpson Desert for me was like turning over another stone to see what lay beneath. I wasn’t attempting to prove any one thing or conquer another; I just went walking with an intimate group of eclectic souls passionate about the environment and a country we all call home. It just so happened that the eclectic group was comprised more of camels than humans (12:9).

We’d wake with the break of dawn. A fire would mimic the colours of first light. Tea was boiled in the billycan, my eyes entranced by the flames as I adjusted to the surroundings of a new day. When the body was fed and warm, I would set off with 75-year old Harry or 95-year old Wilco to shepherd the pre-historic looking creatures. We’d untie the bowline knots that prevented them for wandering too far in the veil of night and allow them to graze among the natural flora that had sprung in abundance with plentiful rain. The desert was lush with life; it was hard to imagine it in its harsh, deathly, summer façade. “The shade will kill you in summer” he said. I swallowed his sternness with my last, bitter, gulp of tea.

I always enjoy when clothing brands pass on their creations for me to interpret in my own manner. It means I can take them out of a contrived scenario that may occur on set or in a studio and place them within my own world. For Zulu and Zephyr this meant shooting in between shepherding the camels, climbing trees and inspecting the iconic red sand dunes (and plucking vicious prickles from my bare feet in between). For the most part I shared the camera with a thousand flies. I hadn’t showered since our light aircraft had departed Brisbane city, there was certainly no makeup or hair styling involved (look closely and you might even notice the onset of dreadlocks) and the only steam/iron the clothes were undergoing was from that of humidity. For Nice Martin, it meant skimming rocks, climbing on trucks, sneaking onto the airport runway and prank calling in pay phones in the small, country town of Birdsville.

In an age when social media platforms and personality constructs are proliferating like the flies in the Simpson Desert, it feels nice to shoot photos that hold, in my opinion, some honest integrity beyond face value. These photos, I believe, are as much a reflection of the landscape as the clothing. And that’s what I wanted them to be. A way of drawing viewers attention to a part of Australia that many will never stray and apart of Australia that is teeming with information as to how this country has changed and is continuing to change and adapt to the effects of man, climate change and introduced species. Only with this information can we attempt to manage our ways and create meaningful change.

I like to think how funny it would be if the definition of beauty were to suddenly reverse and my long, lean limbs, full-bodied hair and olive skin became the epitome of an unpleasing appearance, an undesired look. It’s well and good having won a few characteristics in the genetic lottery, but if I can use what power being physically “beautiful” grants to draw attention to impending concerns, such as the environment and our treatment of such, than that’s what I’ll do.

See you in the trees,