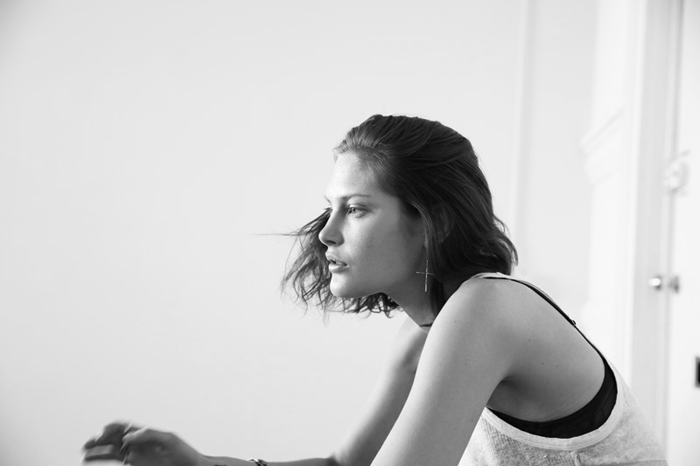 source: Into The Gloss
“There we were, gearing up for Fashion Week and all that that entails (stocking up on band-aids, sharpening our heels, stretching our taxi-hailing arms, practicing our backstage-blitz maneuvers, etc), when we got a little hankering to just get to it. FASHION! So, we called up Catherine McNeil, one of our favorite girls—who is looking, well, major—and put her in the clothes that we’re all dying to wear right now: those nipped-in jackets, silk shirts, and cigarette pants from Saint Laurent, specifically Look 1 from Hedi Slimane’s first show, replete with wide-brimmed black hat and vibrant lip, courtesy of YSL Rouge Volupté Lipstick in Red Muse.
It was all a little déja vu for McNeil, who walked in the Saint Laurent show in Paris (Slimane, she told us, allowed her to wear his gauzy black dress down the runway on one condition—she had to remove her nipple ring). Not a bad booking after a several-year hiatus from modeling. “I had moved to London and told my agency, ‘I’m not doing anything,'” McNeil said. “I took two years off and I shaved all my hair off.” Her hair has since grown into a proper bob (just a little longer than Daria’s in the latest Céline campaign), which is, coincidentally, very on-trend. “It’s funny, now I go into a shoot and I’m like, ‘I want extensions!’” she said, “and everyone is like, ‘No! Your hair is so modern.’” Short hair can also change you and your routine. (This, we know from Emily, Leandra, and Karlie’s recent brushes with scissors.) McNeil agreed: “I think it’s about how you hold yourself. If you can carry it off, with confidence, I think it can work. But you’re not waking up and putting yourself together with makeup and all of that—with this kind of hair, you wake up, roll out of bed, and that’s it.”
When it comes to style, the Aussie model is similarly nonchalant. Her two staples: a Rick Owens leather jacket (“You can spill stuff on it, throw it on the ground, it just gets better”), and a new-ish pair of Isabel Marant wedge sneakers (“Good for when you’re walking around five hours a day…even if a bunch of girls are wearing them now—I don’t care, I’d been wanting them for years”). She’s also embraced a more health-conscious lifestyle. “Before, I didn’t really care so much. It was kind of just like, ugh, whatever, get on with it. But in the last year, I’ve started to take care of myself very well,” she said. “I go to the gym in my building, probably five or seven days a week, though my knees aren’t very happy with me because I’ve been running a lot.”
Other changes? “I gave up coffee about a month ago and I’ve bought all sorts of tea… I’ve changed my cleanser to a vegan one, the 100% Pure Super Fruits Scrub + Mask, which feels nicer, and they have a great moisturizer, as well: the Acai Berry Antioxidant Facial Cream. Other than that, I eat pretty much 90% raw and then the rest, mainly vegan…but I can’t completely give up cheese. I just care about what goes into my body. Over my years of trying different types of food diets, traveling, and things like that, and not working out, working, weird sleeping patterns, green juices, all of that, I learned that it comes to down to how you feel on the inside, which then shows on the outside.”
Of course, that radiant outside still needs a beauty boost on occasion. “I love Armani Maestro foundation,” McNeil said. “It feels like velvet and it just makes your skin look amazing… It’s funny: the other day, I was posing for a friend of mine who’s a photographer and a retoucher and he told me I looked a little haggard and to put some makeup on, so I used some Maestro. I came back in and he was like, ‘Dude, what the fuck, there’s nothing to retouch on your skin. It’s incredible!’ So, I’m definitely using that, a bit of mascara, some blush, and that’s it.”
p: Emily Weiss